We love variety here at the RadioradioX family. We have some pretty damned weird cousins we hear from as they make their slow journey around the radio dial. Variety is the spice of life, and at least for me right now, the gumbo of life is The Purple Stuff.

With Matthew Pryce (guitar/vocals), Joshua Gruft (aka DJ MERCY!!! drums/production/style coordination), S. Mike Guagliardo (keyboard/lasers/dancing), and Mark “The Man” Musial (bass doom), The Purple Stuff opens sweet rifts through time and space in the stages of local venues, and they strive to satisfy every time they go out.

I sit with Matthew Pryce and we talk about the pizza in the fifth dimension.

RRX: Your music is very ephemeral, with everybody telling a story on their instruments, like characters that create a sci-fi scene. It feels “jam band,” but way more put together. When you all are laying down songs in the practice room, do you compose off of jams, or jam off compositions?

MVP: So far, I’ve been the primary song-writer, but we’re thankfully shifting further into group composition. I wrote all the tunes on the upcoming Funkify Your Mind EP (streaming everywhere on 4/19!), but our most progressive and adventurous song to date (Precaerious) is a tune that started from a sweet bass line contributed by Mark. We’ve worked together to arrange and rearrange stuff, and we usually let Josh make the final call on whether something works.

RRX: Purple Stuff plays the kind of music that a casual listener could just zone out to, and a die hard musician might want to pull the notes apart. You guys have a lot of experience and training, so how do you come up with a sound that makes everybody happy?

MVP: Thankfully, there are no ego issues in this band. We all take and give criticism when we feel it’s for the betterment of the song or the band as a whole. We have a great deal of experience playing a lot of different genres, and everybody in the band plays more than one instrument, so everybody comes from a place of knowledge with their comments. We certainly bust each other’s balls, but no one is a dick about it and we know it’s all in good fun. We’ve become a purple family pretty quickly and have good camaraderie. We all hang out with one another outside of band activities, so I guess we all like each other.

RRX: There are a lot of different sounds in there, and I don’t want to guess off the mark by telling you who I hear. We all channel our heroes, though, so who are each of you channeling when the lights are low and the volume’s just right?

MVP: I’d like to think we’re channeling the greater purple sound of the aforementioned fifth dimension. We all could point to dozens of musicians and bands that we love, and between us four – it’s an amazing mixed bag of influences. Mark never shuts up about Clay Parnell (Brothers Past), while Josh and I draw from some of the latest pop music. Mike loves jazzy jam bands like Lotus, Lettuce, and Galactic. All of this mishmash of stuff helps to color the sound in hues of mulberry.

RRX: So, Purple Stuff. It’s the well-known toss aside when a kid wants Sunny D. Also, a band in Family Guy when Wilford Brimley gunned down an out-of-control Teen Choice Awards. So, let’s hear it straight from you; where did Purple Stuff come from?

MVP: I had to look up that Family Guy reference because I had no idea about it. Suffice to say, it’s none of these things. It’s not a Chappelle reference, nor anything beyond loving the color. The long story is that I booked a string of shows a few years back. Without much naming inspiration, I was very against billing the band as “The Matthew Pryce Band” – a friend of mine suggested “Matthew Pryce and The Purple Stuff” which suited me a lot better. Now, we’re together as a four-piece unit so need to introduce myself in the title and that’s WHERE WE AT now.

RRX: I’ve seen video of Purple Stuff playing in Dinosaur Bar-B-Que in Troy, and I’m getting the treat of listening to some songs that might not even be out yet. On the journey to greatness and notoriety, where are you guys right now?

MVP: Funkify Your Mind drops on 4/19, Six tracks of varied funk power and disco rock. That’s our first official release. We’re booking out into the fall now and have some fun gig stuff on the horizon. Pennsylvania, New Haven, Rochester – these are all in our sights beyond the Capital District. Another thing we’ve been doing is throwing these “Stream Parties” where we patch a soundboard mix into Facebook Live, have some friends over and broadcast the party live to our adoring fans on the interwebs.

RRX: We’re catching a groove right now at RadioradioX, and that’s trying to help the next generation of musicians get a taste of what sun gets through our magnifying glass. What advice would you give someone who just made their first trip to the music store?

MVP: Damn, this question is kind of tough. I mean, I have a degree in music so suggesting they start at the beginning with Gregorian chant and work their way to Cardi B seems like a pretty pretentious answer. So, yeah, let’s go with that. Listen to it all. There is great music in all genres even inbred modern country has some sweet licks.

RRX: This is where you answer the question I never asked. Who do you love in the local music world right now? What do you have coming up for the rest of this year? The floor is yours.

MVP:  Locally, we’re into a variety of stuff. We just played a great show with Teddy Midnight, electronic trance jam stuff – that’s really Mark & Mike’s domain. I’m heading up early to a show on Saturday to catch my buddy Lucas Garrett play his set at the same benefit. He’s got a new record coming out. Wavy Cunningham is a longtime collaborator of Josh’s – together they have a bunch of great hip hop records. Wavy will be a guest on an upcoming stream party too, so we can’t wait for that. As for us, we’re releasing this record, rehearsing new tunes, fanning out across the globe, drinking Saison, sharing Gritty memes on the internet, and trying to fill clubs with our infectious dance grooves. Get on the purple bus, it’s the purple party. You are invited.

Blurrdvision: Rapping Down The Road To Recovery 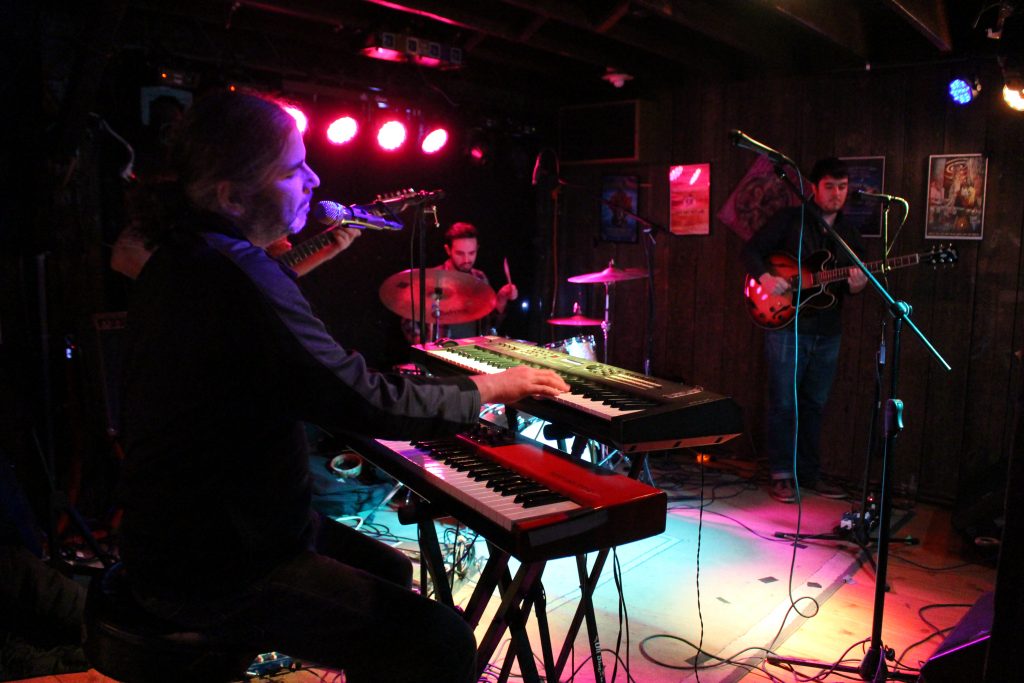