When we are children we dream of being many things. But when I was younger I wanted to be an elevator operator. I was only five years old what did I know? It seemed like a real important job at the time. It really doesn’t matter now it was a dream and I blew that opportunity! We are easily influenced at a young age and we may not realize our true potential. Some of us see the bigger picture and know that there’s a pot of gold waiting for us!  Sometimes it seems only the ones who start out with nothing becomes something.
JJ Savage knew what he wanted to do for the rest of his life at a young age and before he could walk, he was running with a guitar in his hand. Already making his mark on the East Coast, now on the West Coast, with only one thing in mind and that’s world domination!
RRX: OK was it true that you wanted to be a professional wrestler before musician?
JJ: I did actually! I had a few ideas of what I wanted to do before I picked up the six string beast.
RRX:  Take us back to when you got your first guitar when did you begin this journey?
JJ: Well, I started on drums around the age of 7 before I realized I was destined to shred. I got a guitar for my 9th birthday and got hooked up with some lessons. The rest is history.
RRX: Let’s talk about the years prior to you  making it to California?  Was it a struggle?
JJ: I moved out when I was 15 to take on the road. I have to say, those years were the most difficult. I’ve learned a lot about myself and went through a lot of rough times. I left New York after a bad breakup and the sudden clash with my original band mates. I saw this as the one opportunity to put all my cards on the table and risk everything like I never have before. A year later I am very grateful, happy, healthy & don’t plan on looking back.
RRX: Before even finding a band you shared the stage with many legendary guitar players and musicians. Lets talk about some of those times and how that has helped you get to where you are?
JJ: Yeah, I’ve been fortunate enough to share the stage with some really great names in the biz. I remember watching Johnny Morse rock when I was a little guy, I’d never thought he’d be my best friend and a member of his band since I was 12. That really opened a lot of doors and allowed me to express myself as a musician and a person as well as gathering a much larger audience. A few others that have helped me to get where I am now are Michael Angelo Batio, Richie Scarlet, Frank Hannon, Andrew Freeman, Jason Hartless and Brad Lang, which I’ve been honored to share the stage with. Really cool guys too.
RRX: Fast forward to present , you’ve made it to California and in just a year you’ve made some pretty big steps explain what happened?
JJ: The first step was getting my health and head in the right place before I was able to take on anything. I was hit pretty hard by trauma and negativity before I left New York. But once I did that 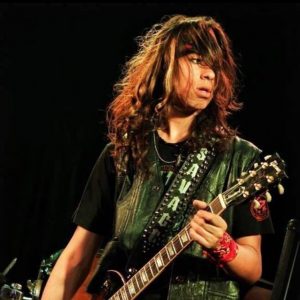 it was time to buckle down and get to work. I hooked up with a old buddy of mine who grew up in Albany, NY that I’ve known for a while as a kid who put me up to get started. Around the same time I met up with civil rights activist & rock n roll vet Turmoil, who ended up signing me to his management company. He’s been amazing and definitely one of the greatest human beings on earth. We got together with a few lineups and did some touring, song writing and promotion before we ended up scoring a deal with GoG/Mi5 Recordings/Universal Music Group in 2019, releasing a single titled “Junkyard Dogs” which has really been getting great reviews from the rock/metal community. I look forward to many years to come working next to Turmoil and creating some more rock n roll tracks.
RRX: What has been your biggest inspiration to motivate you musically , heaviest influences?
JJ: As a kid I remember Zakk Wylde just leaving me speechless. I’d say Zakk and Ronnie Montrose have been the two players who I’ve modeled my playing after. I get my aggression and speed from Zakk and my tasty “crying guitar” leads from Ronnie. Blended together creates a sound that just leaves the heart throbbing and the head banging.
RRX: You I have recently made some big announcements is there any special news you can share with us that hasn’t been announced yet?
JJ: I can definitely at least say to keep an eye open for some really cool and fun stuff coming up. I’m always grateful and thankful for the fans who make this all possible. There are constant updates on my social media and website, so make sure to check in there daily!
RRX: What is the plan for 2020?
JJ: 2020 is going to be a great year. We have lots planned! I look forward to hitting the road and releasing more tracks. But yeah, 2020 I think will be a really big push in the right direction. I’m looking forward to it!
JJ Savage new single “Junkyard Dogs”-
Available on iTunes-Spotify & Amazon

Knocking The World Down To Size – Violent By Design

Sarah Holub Schrom – Life in the Space Between Gateways