‘All we need is love’. The love that was felt all around Revolution Hall Saturday, March 7, was pure, deep, and electrifying. This was all in part to the volunteers, event organizers, concert goers, and the musicians who took part in the “7th Annual Dustin Mele Memorial Concert”.

In 2013, Dustin Mele, the son of Troy musician, Joe Mele, and Patti Quade, committed suicide. Dustin was a professional poker player who donated his time to give back to his community and helped those less fortunate during his travels. His passing left a huge hole in his family’s heart and his friends who knew him as a gentle, kind soul.

To honor Dustin’s memory and others who committed suicide, the Mele-Quade family decided to put on the “Dustin Mele Memorial Concert”. The yearly event, now held for seven years, raises awareness about suicide prevention and mental health. Proceeds go towards local organizations, The American Foundation for Suicide Prevention (AFSP), National Alliance for Mental Illness (NAMI), and Catholic Charities CoNCERNS-U Programs. These programs are essential in assisting residents who are in crisis and take part in these programs to help get back on track with their life, mental health, and well-being. 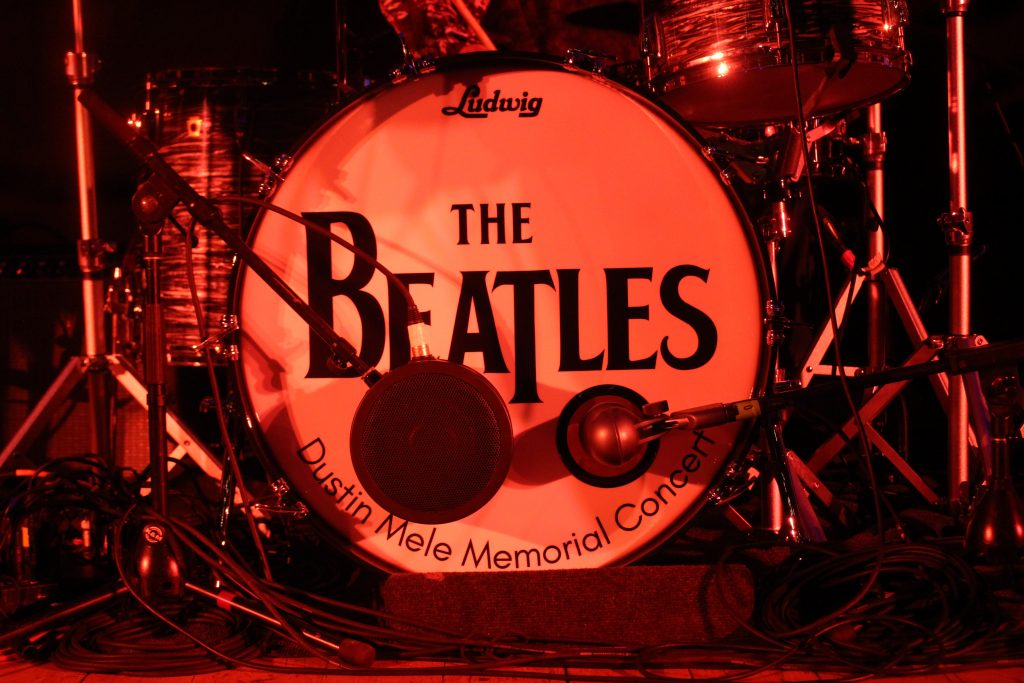 According to Dan McCoy, Albany County Executive, suicide is an uncomfortable topic to discuss. In order to decrease the stigma about not discussing your mental health or thoughts of suicide to family members, friends, and professionals, having local programs as AFSP, NAMI, and CoNCERNS-U, allows community members who are at risk to reach out to these organizations for assistance. These local organizations help save lives while reducing the stigma of suicide and mental health.

Every twenty seconds, someone commits suicide. In today’s technological world, social media has taken over our lives. We are always looking down on our devices, immersed in the world that is happening in the palm of your hand. There are less face-to-face interactions now than there were before, and people miss out on what’s going on in the world when you’re looking down on your device.

Before the music commenced, Christopher Garabedian spoke his words of wisdom before giving his annual prayer. Garabedian encouraged the crowd to “…get nosey with people. It’s time to get busy, personable with people, and we all need to grow up.” If you see something’s wrong, say something! Instead of being glued to your device, get to know your friends, family, and neighbors. You never know what someone’s going through until it’s too late.

This year’s music theme was inspired by “The Beatles”, a band that Mele and Quade were highly fond of in their youth, even taking the trip to Shea Stadium to watch them perform during the 1960’s. “The Beatles” revolutionized our thoughts on peace, love, and kindness for all humankind during the psychedelic era.

Local acts, “Across the Pond” (Beatles tribute band), “Soul Sky”, and “Super 400”, along with a slew of special guests including Josh Bloomfield, Erin Harkes, Johnny Rabb, Mike O’ Donnell, Chris Carey, Steve Candlen, and Brian Bowes, who flew in from Nashville, TN to perform for one night only, performed a beautiful, spectacular array of tunes from “The Fab 4” that captivated their audience to their full delight. Their music certainly did not disappoint the crowd who were on their feet to dance and sing along to signature tunes as “Hey Bulldog”, “Oh Darling!”, and “All We Need Is Love”.

“Across the Pond” blew me away with just how accurate they performed each Beatles tune. Every nuance heard in their sound, drum strokes, guitar picking, and pounding keys was perfectly played. Hearing their renditions of “I Wanna Hold Your Hand”, “If I Needed Someone”, and “Hey Jude” (with added contributions from the audience), made you feel like you were listening to a live recording of “The Beatles” albums. That was how awesome they were. Hearing them perform first (and for the first time), I can see now why they were a headlining act and how faithful they are towards “The Fab 4”. 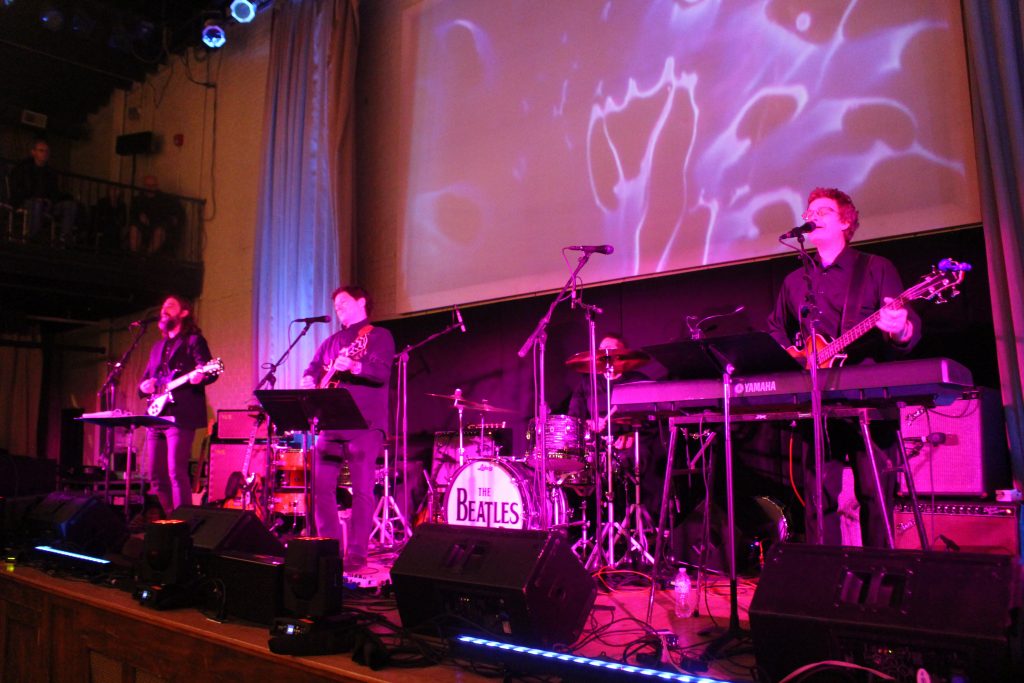 “Soul Sky” took on a psychedelic approach to their covers of “Love You To”, “Rain”, “While My Guitar Gently Weeps”, and John Lennon’s “How Do You Sleep?”. The band continued their stellar performance with the addition of power-house vocalist, Erin Harkes and rockabilly legend, Johnny Rabb, who took their set to a whole new playing field. Harkes belted out her signature high tones in her beautiful rendition of “In My Life” and sung the sultry blues in one of my favorite tunes, “Oh Darling!” Rabb shook things up and brought the “Bad Boy” out of him with the cover of Lennon’s tune and on “Dizzy Miss Lizzy”, just before “Soul Sky” closed out their set with “Imagine”.

“Super 400” closed out the show with a little help from some of their friends; “Cloud Lifter’s” Mike O’Donnell (guitar/vocals) and Chris Carey (keyboard/tambourine/vocals), Steve Candlen, and Brian Bowes who flew in from Nashville, TN to perform! Their selection of Beatles classics was rockin’, jamming, spectacular, and truly one of their best sets of music I’ve heard since their “Rolling Stones Tribute” at The Hangar on The Hudson. “Day Tripper”, “We Can Work It Out”, “Dear Prudence”, all songs played to perfection. “Hey Bulldog” allowed the band and guests to jam and rock out together to their fullest until the song’s very end (and the event’s ending). Their set rocked!

What amazing work completed by everyone who was a part of the “7th Annual Dustin Mele Memorial Concert”. Amazing job to the Mele-Quade family, to the volunteers, organizations, to Revolution Hall, Live Sound Inc, and to “Across the Pond”, “Soul Sky”, “Super 400”, and special guests who took part in the show!! Long live “The Beatles” and thank you to what you do to raise awareness about suicide and mental health. Together, we can work together to get personal with people and work to fight off this epidemic that has taken too many lives.

For those who couldn’t attend the concert but wish to donate to AFSP and the “Walk For Rita” can go to https://afsp.donordrive.com/index.cfm?fuseaction=donorDrive.teamParticipants&teamID=250731&fbclid=IwAR0skcAxRfjOmBwCJDlHgVVtTNLT8lNBXjHRbyvH9pq5LINqtbE09dK4UiM .

Photo Gallery: For the Love of Steven #ForTheLoST Benefit & Fundraiser: 8/31/2022 at The Hangar on the Hudson

Wild Weekend of Music in New England -By Ed Conway

Some Help Bringing In the Spring