Musicians and animals. There’s something special about animals that musicians (and all humans) love. Is it the way how they keep us calm and secure in our surroundings? Their temperament? Or it is just simply their appearance?

The answer? Yes, all the above.

I’m an animal lover. I’ve a dog and plenty of cats to keep my family and I company. All our cats, apart from the dogs that we got from breeders, were strays that suddenly popped up at our home awaiting their wet can of cat food or dry treats wanting to be loved. Never once did we go to an animal shelter to find an animal companion out of the first nineteen years of my life, until 2008 when my beagle, Barney, passed away from old age.

My first recollection of going to the Mohawk Hudson Humane Society was in the summer of 2008. My beagle died and my family was looking for a dog to adopt. Although we found what we thought would be our dog on their website, the dog was already adopted by another family. Once we stepped inside the humane society to take another look, we found our new companion, a Maltese named Snowflake. For four years, she found her retirement home with us and was a great companion to have until she passed on.

Fast forward twelve years to Friday, January 24,2020. Instead of adopting another animal, I was asked by my friend, Kostas “Gus” Hais, guitarist/vocalist of “Blackcat Elliot”, to return to MHHS to cover an important feature story that he wanted me to be a part of with him and a few of his close musician friends.

On December 20, 2019, Hais, along with Mike Trash (“The Erotics”), Thomas Hogan (aka “Brother T” of “Noncompliants”), and T.J.H. (“Straight Edge Punks”), took part in “The Makin’ Metal Benefit 2019” at The Fuze Box in Albany, NY. This was the second benefit and memorial event held in memory of brothers, Sean and Henry McFerran. $1,773.00 was raised & donated to MHHS. Together, these four area rockers reunited a month later to bring their donation to Marguerite Pearson, the organization’s Director of Marketing and Communications.

The McFerrans were animal lovers. “Brother T” reminisced about Henry and his cat, Robo, that he found in a dumpster. Robo lived until the age of 24. Sean was involved with Adirondack Search and Rescue. He rescued a dog named Valkyrie. Valkyrie’s passing led Sean into a deep depression and a broken heart. “Brother T” and his friends were focused on having a benefit for Sean and knew that Henry would approve them raising money for MHHS after his passing on September 11, 2019. Two benefits for the brothers were held at Chrome Food and Spirits and The Fuze Box.

Pearson and her staff member, Alison, gave my friends and I a tour of the newly revamped MHHS and its many rooms where they house and take care of animals that are in search of their forever home. The facility revamped two and a half years ago, is now two floors and houses plenty of room needed to take care of the animals.

Our tour through MHHS lead us first to the cat section. We viewed the cat condos where most of their cats are living in, either alone or with another cat, checked out the community cat rooms; the paw office that houses working cats that are feisty, independent, and good mice catchers, a room for shy spirit cats that enjoy the company of other cats than humans, and a third community room where potential animal adoptees can interact and handle the cats to see if they are a good fit for their family.

Alongside cats, the humane society houses dogs. Most dogs at MHHS are Pitbull-mix and mastiffs. This section contains spacious dog kennels, a grooming room, a “real life” room for dogs that looks like a living room with couches and chairs, and an assessment room for dogs to be tested for potential aggression towards other dogs, cats, and humans. In addition to both cats and dogs, the humane society also houses small animals, such as rabbits and guinea pigs.

MHHS contains treatment rooms for sick pets, a large surgical suite where dogs and cats are spayed and neutered and receive other treatments; a multi-purpose room where patrons can take part in educational programs as dog training and yoga with cats, a large laundry and kitchen area that houses food and supplies, industrial dishwashers, washers, and dryers, a “safe keep” room for animals whose owners are in shelter with various local domestic violence support organizations, an area with 24-7 access by animal control for incoming stray pets, exam rooms, and a volunteer lounge.

Volunteers play an important role at MHHS, assisting in many aspects of animal care. In 2019, volunteers contributed over 26,000 hours of their time. In that same year, their food pantry, with locations in Menands and Saratoga, provided over 53,000 meals for community pets. Currently, MHHS has reached their max capacity for their animal capacity, at 385 animals.

To keep pets with the families who love them, the society offers low-cost spray/neuter and wellness care to those who qualify based on their income. MHHS also has a dedicated spray/neuter and wellness clinic located in Saratoga, that serves North Country pets. In 2019, over 3,000 surgeries were performed for the public, in addition to wellness services such as vaccinations, microchipping, deworming, and flea treatment.

MHHS, a 501 (c) (3) non-profit organization, has been around since 1887 making it the oldest humane society in the Capital Region. It relies on private donation and doesn’t receive any state, federal, or government money to fund their organization. Learn more at mohawkhumane.org. 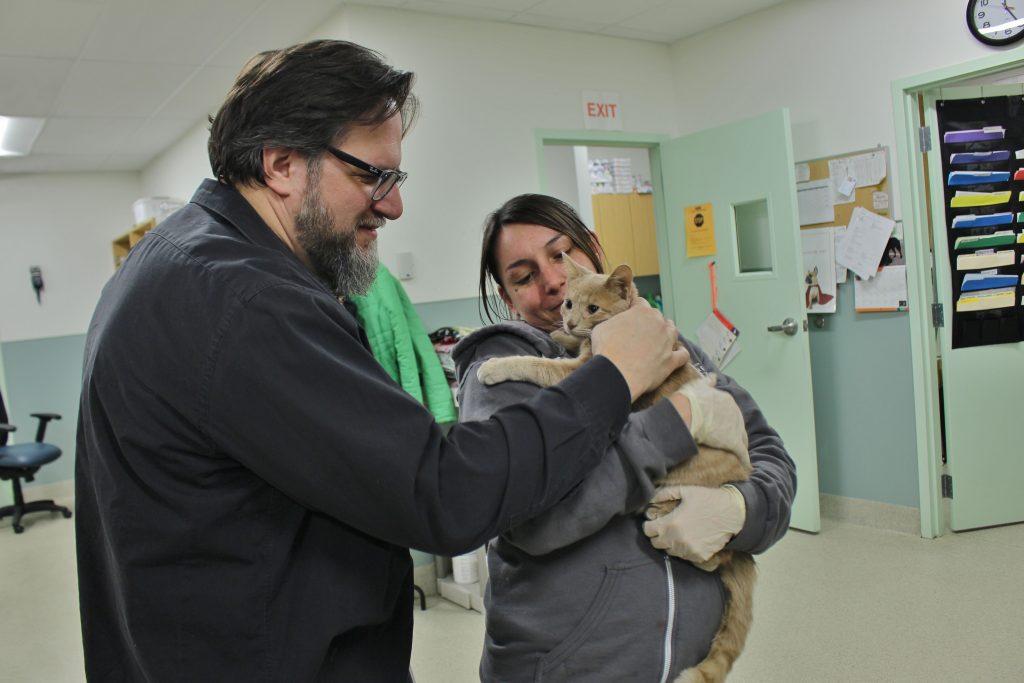 Being involved in this special tour at the MHHS with my friends was extremely rewarding. It was fascinating to see how much has changed since I last stepped into MHHS with my family and witnessed how the organization has improved the lives of all animals who want to be in a loving forever home. Although I didn’t know the McFerrans personally as my friends did, hearing them share their stories about how impactful they were in their music careers, personal lives, and learning about their love of animals, was inspiring. The McFerran brothers went out of their way to support local bands performing in the Capital Region and this time, their friends continued their friends’ legacy by putting on two successful events that raised money to assist a local music program and an animal shelter, two things that both meant something to the McFerrans and their friends and family.

Hais, Trash, “Brother T”, and T.J.H. are going to take part in  “Underrated Fest 2” on April 4, 2020 at the Fuze Box. This time, proceeds will go towards the McFerrans’ mother to help pay for funeral expenses. Bands to take part in this event include “Straight Edge Punks”, “The Erotics”, “Blackcat Elliot”, “Lifelong Death”, “S-Mann”, “Ike’s Wasted World”, and “The Lunkheads”. The time of the event is from 4:00 p.m.-midnight. 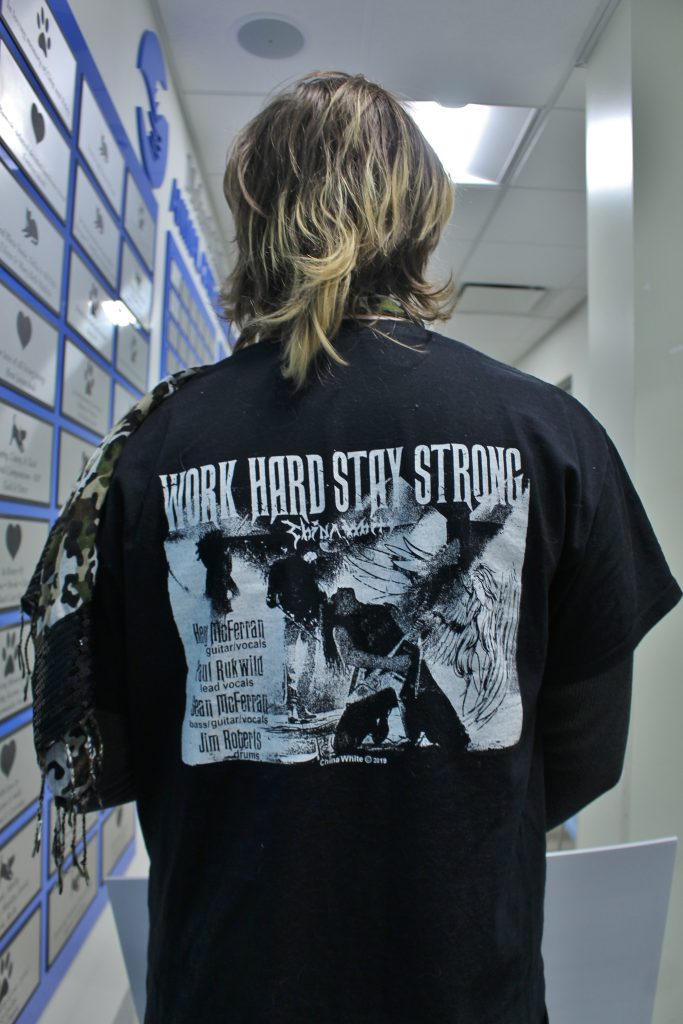 Another event that was recently announced to raise further awareness for MHHS was the Second Annual “Rock N’ Rescue”, originally to be held on Sunday, March 29, 2020 at Philly Bar and Grill in Latham, NY. According to Marguerite Pearson, as of March 10, “Rock N’ Rescue” has been postponed due to the Corona Virus. A future date for the event has yet to be determined.

“Rock N’ Rescue 2020”, originally scheduled to on Sunday, March 29,2020 at Philly’s Bar and Grill in Latham, NY, has been postponed due to the Corona Virus.

Thank you again to Gus, Mike, Brother T, T.J.H., Alison, and Marguerite for allowing me to be a part of this special moment with you. “Brother T” would also like to extend his thanks to Eileen Swint, Sara Heeran, Fuzzy, Kim Roberts, and Paul Rukwid for helping with both tributes. Our musical and creative community is made up of special people who go out of their way to give back to their local community during times of hardship and good moments to be forever treasured. Thank you for your kind hearts and for sharing your love and support you had for the McFerrans with me. This was a special moment to remember.

I left the humane society feeling very happy and proud. Before leaving, I made a $20 donation in memory of my two good friends, Greg Haymes and Tom D’Ambrose, both of whom were animal lovers. When they both passed on, donations from “TomFest” and at “Remembering Greg Haymes” from the Blotto merchandise, went towards the Mohawk Hudson Humane Society. It made me feel good to make that donation in honor of their memory as well as the McFerrans.

Be sure to attend “Underrated Fest 2” on April 4, 2020. Learn more about the Mohawk Hudson Humane Society at https://mohawkhumane.org/ .

Keith Streng: What It’s All About