When you hear the phrase “Senior Living,” you may imagine a retirement home for the elderly. To the Albany music scene, however, Senior Living means crushing riffs and waves of distorted guitar. The band released their first EP titled 35mm in August of 2019 featuring three tracks that are available on Spotify and other services. The band is made up of Zac Geddies (vocals/guitar) and Jeremy Lopez (drums/vocals). Senior Living have toured across and beyond New York with a dark and heavy sound that would delight any fans of depressive punk/shoegaze. The band spoke about their influences, touring and even a melted amp. 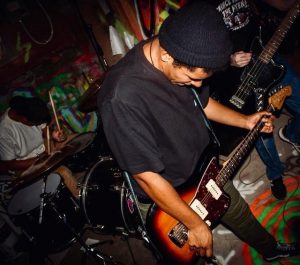 RRX: Thanks for coming out to talk

ZG: Thank you for having us.

RRX: Do you guys have any new releases planned for the near future?

ZG: Nothing scheduled as of now, but that can change in the matter of a minute.

RRX: How did you two meet and decide to make music?

ZG: Apparently my breath smelled (laughs). And then like, about a year down the road I was looking for a drummer and I remembered that he played drums so I hit him up on Instagram. Slid into his DMs.

RRX: Where did the band name come from?

ZG: Honestly I think It used to be a joke between Jeremy and I about senior year of High School, it being about not caring about school and things.

JL: I was on vacation in New Hampshire and I saw a sign in front of a nursing home, just a flag that said “senior living.” That’s where I saw it.

RRX: You guys are originally from Albany, do you have any venue that you really like to play frequently?

RRX: You have a show there tonight with what other bands?

ZG: we’re playing there and so is Trial Names, Pencil Dive and Benchmark. Benchmark are coming on tour, this is like, our tour homecoming show. We’ve been on tour the past week.

RRX: You guys have a sound very reminiscent of the band Nothing, and you’ve covered them before?

ZG: Yeah the song “Vertigo Flowers,” which I think was a single off of their album Tired of Tomorrow.

RRX: What other bands influence you in that way?

JL: I’m a big Title Fight guy. Title Fight was this post-hardcore band that came up with Tiger’s Jaw and Balance and Composure and all those Wilkes Barre, Pennslyvannia bands. Their inactive now, sadly, right when I start to get into them but I like them a lot. Their sound really progresses through each record. I think our last song “Heathers,” the guitar has an effect that sounds a lot like the guitar on “Hyper View,” which is their (Title Fight’s) second most recent record, where it’s more shoegaze.

RRX: So who ends up doing most of the songwriting?

ZG: I’ll give you the rundown; usually how it works is I write poetry or spoken word and have this huge catalogue that I can turn into songs and I just fit whatever poem to whatever instrumentation I’ve been working on. And then a lot of my writing has to do with hearing something and picking out notes that would fit in good places, I guess. But Jeremy is a big part, we always work on stuff together all the time. Nothing would sound the same without his input.

RRX: You guys were just on tour, were you touring with anyone?

ZG: We actually did this run on our own. It was cool though because we got the chance to meet a bunch of different bands in whatever city we were playing in.

RRX: Do you have any fun stories from your tour?

ZG: A lot of fun stuff happened, anything from the ride down to crashing in a hotel one night. Just a lot of antics. Shout out to our tour crew, Nadia and Brenden – good peeps.

JL: I really liked the first night we stayed over with this guy, he had like, three other roommates and he had a whole electronics workshop and I learned that he runs his own business from his house. That’s what I want to do one day so that was really cool.

ZG: We actually got a chance, the night after our show in Philadelphia where we stayed the night at Tyler’s, we got a chance to do an acoustic session. That morning, we woke up and recorded an acoustic song from the pull out couch I slept on – so that’s being edited and will be out soon.

RRX: Also, something else, earlier you mentioned a little story about a melted amp? I think that’s worth telling again.

ZG: Ok so, we have this friend in another band called Scotchka from around here – shout out to Scotchka – his name is Dominic. This happened back when we knew he played in Scotchka but we also knew he worked at guitar center. So we had this old amp that was completely busted and we decided to set it on fire.

ZG: Yeah we basically set it on fire on it exploded, so we were like, “oh wouldn’t it be really funny if we tried to bring to Dominic at Guitar Center and try to trade it in or try to cash in on the warranty policy?” So we brought it there and he actually was there, he had the manager on the phone, trying to figure out how to do this thing, meanwhile there’s just a melted guitar amp sitting on the counter at Guitar Center. But yeah, that was the start of a beautiful blossoming friendship with Dominic and the rest of Scothcka.

RRX: How do you guys typically describe your music to others?

ZG: Yeah, loud and sad I think is what our Twitter bio used to be. But honestly just like, punk with heavy shoegaze influences – probably the easiest way to describe it.

RRX: Earlier we were talking about another band, Gleamer, you know them right?

JL: Yeah so the lead singer of that band Gleamer, Corey, he mixed our recent EP, 35mm, we just recorded it in our basement and sent it over to him to mix and master and then he just sent it back to us. So shout out to Corey.

RRX: I feel like there’s a bit a lack of actual shoegaze bands around Albany, do you wish it had more of a scene or are you guys happy to sort of be one of the few?

ZG: I’m kinda satisfied with this monopoly we have out here (laughs)- no no no, I mean, honestly starting new bands up all the time is a cool thing so if anybody is out there and has a creative image in mind definitely try to go through with it. Or hit us up, we can play a show – at Denny’s (laughs).

RRX: Speaking of Denny’s, do you guys have a favorite food you like to eat on tour?

JL: Chipotle hooked us up with a free burrito once cause we said we were in a touring band.

RRX: That’s really cool, and proves that Chipotle is better than Moe’s (laughs). Anyway, in the future, where do you want to see your sound go?

ZG: I guess just focus on narrowing down our image and whatever we’re trying to put out. Our vision for a full length is to really put our solid ideas out there and present ourselves- kind of like a painting.